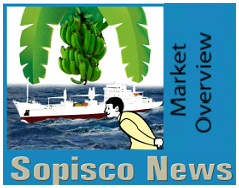 Banana selling prices in St. Petersburg ranged from USD 22.50 to USD 24.10 per box CIF. Around 1.92 million boxes were discharged in week 44, and 2.03 million are expected for week 45. November 4 was Unity Day -also called Day of People's Unity -, a public holiday in the Russian Federation. The exchange rate between the USD and the Ruble was almost the same as the previous week,1 USD=61.62 Ruble.

During the week ending October 24, 2022, the year-over-year inflation rate in Russia was measured at 12.88 percent, down from 13.1 percent measured over the previous week. The growth in consumer prices at the end of February and March 2022 was caused by the war in Ukraine and subsequent international sanctions on Russia.

The higher prices were paid for good quality bananas of Ecuadorian origin and cartons of higher weight. Lower prices were paid for old bananas from previous shipments kept in cold storage or of Central American origin. The market was depressed, although lower volumes of bananas arrived -a total of around 150 FEUS, according to local traders. The exchange rate between the USD and the Turkish slightly worsened compared to the previous week, with 1 USD = 18.62 Lira.

Prices in Iran were almost identical to the previous week, but the local currency lost further ground to the US currency, and the exchange rate was 1 USD=345.000 IRR.

The Rial might continue losing ground to the USD for the turmoil and street protests affecting the Persian country. There were no bananas from the Philippines discharged at Bushehr during the week.

In a very peculiar activity, prices in the Ecuadorian Spot market ranged from USD 13.00 and up to USD 15.00 per box, only for the fruit during the week. The crops were still affected by lower temperatures and short periods of solar luminosity, which hindered the growth of the bananas. Large volumes of fruit didn’t reach the required grade to be exported due to the adverse weather conditions influenced by the Niña phenomenon expected to affect Ecuador until February or even later. Production was reduced, and there was a drop in crops by up to 50% in some producing areas. Shippers with difficulties in completing their shipments were the ones who paid the higher prices. According to industry sources, production is not expected to improve because of low bagging.

Regarding the Chartering Market shipments of citrus from Morocco started during the week, with the first vessel destined for the US east coast, and more shipments will follow from Agadir to Russia.

The expected frequency is to be 2-3 vessels per week, including both destinations.

Larger volumes are expected to be moved by Specialized Reefer Vessels in about four weeks.

With the start of the cherry shipments from Chile to China, 4-5 Specialized Reefer Vessels are expected to be employed.

Also, the Chile-USA grape trade is expected to start later in December.

One Specialized Reefer Vessel of about 353,000 cubic ft operated by Japanese interests was fixed at a non-disclosed rate to perform a banana voyage from Ecuador to Russia.

According to brokers, at least four large vessels were fixed for one year, at rates rumored to be over 115 US Cents per cbft, per month for that period.

Some smaller vessels were employed in the fish trade and potato shipments from Northern Europe to Northern Africa.

In general, rates for Specialized Reefer Vessels are expected to be higher than the previous year.

US Cents 95-100 per cbft, per month for larger vessels